Can and Should Homeowners Associations Regulate Flags?

by Homeowners Association California | Oct 24, 2019 | Investing in a Condo or HOA Community 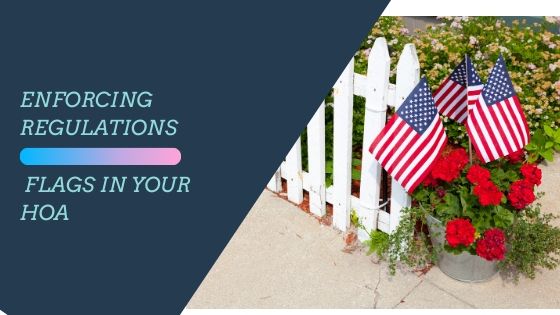 Most of the time, Homeowners’ Association rules are pretty straight forward. Certain architectural restrictions are understood, fees are due a certain day, etc. However, there are a few times rules that affect issues that can be very sensitive for the community. One example is the homeowners’ ability to fly flags. What should be allowed that is best for the entire community? Or does the HOA even need to be involved at all? Some flags are purely decorative, but some can be personally significant, so the board needs to be thoughtful about these rules. Not only can the issue be emotional for community members, but it can garner press attention and the board may want to consider how they will appear.

Sound like an exaggeration? There are a couple of semi-recent examples. In Texas, a homeowner reported to the press that the property management had forced him to take down his American flag because it was threatening to the Muslim community. In Florida, a property manager forced a former NYPD officer to remove his flag commemorating the victims of 9/11 because it interfered with the “aesthetic harmony of the surrounding properties.” While those managers might have just been following the rules, they clearly looked bad in the media. This gives you an idea of how sensitive the issue can be.

Since there are several issues around the use of flags in Homeowners Associations that should be given consideration. We’ll go over some potential conflicts and guidelines that boards can evaluate.

At face value, whether to fly a flag may seem like an issue that should be left up to each homeowner. Maybe it is the American flag or a decorative pumpkin flag during the fall. Does it really impact anyone else? It can. Once you dig into details, there can be complicated issues and legitimate concerns. Not only could the content of the flag potentially offend someone else, but size, colors, location, or other factors may violate HOA rules.

For instance, there was a court fight that eventually required legislative action over whether a homeowner could install a flagpole in their yard to display the American flag. It may sound like the homeowner’s associations that were fighting the flagpole were being unfair, but the constant clanking of metal against the pole could possibly irritate the neighbors. Or the amount of digging needed to install the pole could risk damaging community pipes. These are all legitimate concerns.

There are federal, state, and usually, local laws regulating HOAs and flags, which can provide some guidance. The federal law (the Freedom to Display the American Flag Act of 2005) blocks Homeowners association from completely preventing anyone from flying the American flag. However, the law does allow associations to place reasonable limitations on the time, place, and manner of flying the flag if those restrictions benefit the majority of the community. For instance, a rickety flagpole by a public sidewalk might be a safety hazard. Or a flag might be so large that it blocks a neighbor’s view, so some size limitations might make sense. Holiday-related flags might need to be taken down by certain dates.

Some HOAs also regulate what material the flag can be made of, to prevent flags made of lights or to prevent torn or damaged American flags which can offend people. Basically a homeowners association cannot implement a blanket ban the American flag, but it can regulate it as necessary for the community.

State laws vary, and many states prevent the bans of other types of flags. In California, there are some additional protections for flying the American flag, and associations cannot ban the use of flags of foreign countries. Of course, they still allow some regulation for the good of the neighborhood. For example, they can limit the number of flags per home, even the American flag.

It sounds like a complicated issue, right? You’re not alone in wondering whether your board even needs to wade in on flags. Experts recommend considering a few questions before your board places restrictions on flag use:

Something else to be aware of is that there can be a risk of claims of discrimination, such as if someone prevented from flying a rainbow flag as an LGBTQ person. Some have claimed discrimination under the Fair Housing Act, but it is hard to prove because the homeowner’s association regulations are usually about aesthetics.

Whether or not to regulate the use of flags should be evaluated for the sensitive issue it can be. Your board may very well need to create some rules, but you can still keep the community harmonious while letting those flags fly!