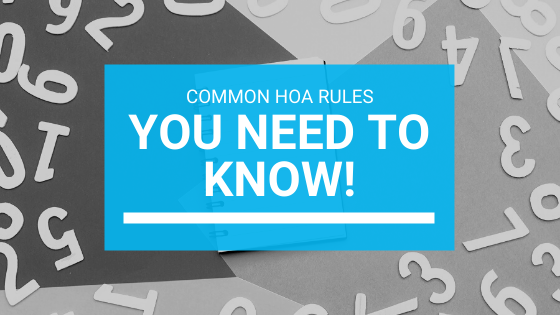 In addition, when people buy a home in a HOA community, they sign paperwork agreeing to follow the rules and regulations. So, it’s important to know what these rules are before buying. Some people may find living in that type of community too restrictive. For instance, the aesthetics of a home and changes that are allowed to the exterior very well could be regulated. And this might be something that homeowners want more control over. So, that’s a great example of why it’s important to know the common homeowners association rules that are in place before buying.

To continue, we’ll go over some of the most common homeowners association rules you need to know. They include:

The HOA will most likely have regulations on landscaping. The association will want to make sure the attractiveness of the neighborhood keeps maintained. And how the outside of a property looks is a big part of that. And while homeowners have to keep landscaping up to standards, the board’s also obligated to keep the common areas looking just as nice. However, some homeowners have a hard time being told what they can and cannot plant. So, fully understanding the association’s rules on landscaping before deciding if it’s the right place to live might be very important.

Whether a property is or isn’t allowed to be rented out, is also likely regulated under the homeowners association rules. This is very important for some homeowners, as they may have bought the property with the intention of renting it. Some associations don’t allow rentals at all, as they’re concerned it’ll lower the value of everyone’s property. Often there are limits on how many properties in a community can be rented out. So, it’s important to also know whether the community has already or is close to reaching its limit. If they aren’t allowing rentals and that is something you want to look into, there could be a waitlist you can join.

Often an association will have rules about vehicles. For instance, how many vehicles one can have on their property, the type of vehicles, and where they can and cannot be parked. For example, there could be limits on boats, RVs, or even commercial vehicles. And parking spaces for residents and guests will certainly have some regulation.

Almost every homeowner’s association will regulate holiday decorations. The rules can be in relation to light colors or a timeframe that you have to put decorations up. And even when they should be taken down. Every community is different. And some are more strict than others. Some don’t allow certain types of decorations altogether or even limit what types of flags can be put out.

It is not surprising that associations would want to limit the amount of noise allowed. Too much noise can be very disruptive to neighbors. Of course, the question is, what is excess? To try and allow people to live how they want, while keeping the entire community serene, there have to be regulations. There are usually rules on when noise is okay and when it needs to be limited. This can apply to parties, animals, construction, and more.

Violation of the Rules

How a homeowners association handles violations of these common rules is important to know. Especially before buying a home in that area. For instance, they may issue a warning letter first. Also, they might immediately fine you for any violation of the rules. The police can carry out some rules, such as leash laws or speeding. But, the association carries out most violations.