What Are the Basics of Homeowners Association Accounting? 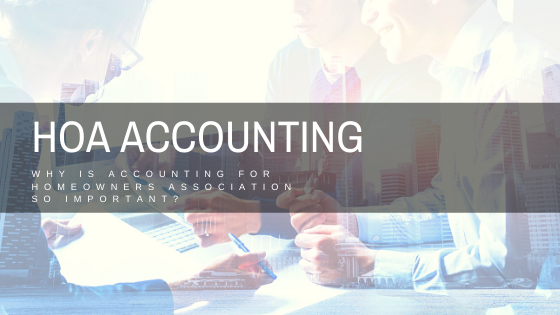 Accounting has a less than impressive reputation. However, it is critical for the smooth functioning of a wide range of both for-profit and non-profit organizations. Homeowners associations are no exception to this rule.

As for why this is the case, the answer is that accounting provides both internal and external parties. With a clear understanding of the state of an organization’s finances. Without accounting, it wouldn’t be an exaggeration to say making financial decisions would be the same as looking for the longest straw in a bale of hay in a lightless room.

Why Is Accounting for Homeowners Association So Important?

Of course, numerous accounting principles guide how accounting should be carried out. First and foremost, these ensure a more faithful representation of the truth, which can sometimes seem counterintuitive. One excellent example would be how most accounting is performed on an accrual basis. Meaning that revenues are recorded in the same periods as the expenses incurred to earn them. This contrasts to a cash basis when revenues and expenses are recorded when the corresponding cash is received and sent out. People use the former rather than the latter because waiting until money has exchanged hands can create a very misleading picture of most modern organizations. Second, it should be mentioned that accounting principles are also useful for creating an everyday basis of understanding. Making it possible for individuals to understand financial statements without familiarizing themselves deeply in accounting.

Regardless, interested individuals don’t need to understand every single aspect of accounting for homeowners associations. After all, they have the option of entrusting such matters to reliable and reputable accountants. However, interested individuals should still develop at least some understanding of accounting basics because that will make it much easier for them to follow everything around them.

What Are Some of the Most Important Financial Documents for a Homeowners Association?

For instance, here are some of the most important financial documents for a homeowners association:

The general ledger is a centralized record of the homeowners association’s transactions. Each listing should include important information such as the transaction date, the amount, and the accounts involved. For those unfamiliar, accounting is carried out using a double-entry system, meaning that an entry on one side of the ledger must be matched by another entry on the other side of the ledger.

For example, when a homeowners association incurs an expense, they will record the expenditure on the left side of the ledger as a debit. At the same time, they will record the same amount on the right side of the ledger as a credit. If the homeowners association pays the expense in cash right away, that credit will be a deduction to its cash. In contrast, if the homeowners association intends to pay the expense in the future, that credit will be a liability called a payable. Eventually, when the payment is made, the payable will be written out as a debit, while a deduction to cash will be made as a credit.

Income statements are one of the financial statements that cover a particular time. Generally speaking, interested individuals will see income statements covering either a month, a quarter, or a year. However, other periods are entirely possible though uncommon. In any case, income statements are what they sound like, which is to say, a summary of revenues and expenses for the relevant period culminating in either a profit or a loss.

As mentioned earlier, most accounting is carried out on an accrual basis rather than a cash basis. However, it is common for organizations to create cash flow statements, which sum up the cash that has been received and the cash paid out in a particular period. After all, this is beneficial information, not least because organizations can’t survive if they don’t have enough cash and cash equivalents to cover all of their short-term obligations.

Why Should You Get an Annual Audit for a Homeowners Association?

Moving on, interested individuals should make sure that a homeowners association gets audited on an annual basis, which is very important for several reasons. For instance, the auditor will look over the accounting practices used to produce the financial statements and the other aspects of the organization’s accounting. Suppose they confirm that everything is as it should be. In that case, that means that both internal and external parties can have more confidence that the financial statements are a faithful representation of the truth. For this reason, many jurisdictions actually require homeowners associations to conduct annual audits. Even when the law doesn’t require it, many homeowners associations will have bylaws that demand said the procedure for the same reason. Ultimately, financial statements are either worthless or worse than useless if they can’t be trusted, thus making audits necessary for organizations that want interested individuals to trust their financial statements.

This article is no more than a short introduction to a limited selection of accounting basics. Interested individuals should look further into the issue either on their own or with accounting professionals’ help. Indeed, they can entrust their accounting for homeowners associations to a trusted accounting firm such as Silvercreek, thus freeing them up to focus on their specialties. However, they will extract more value from the financial statements if they have a decent understanding of accounting basics.