What Is An Alternative Dispute Resolution? 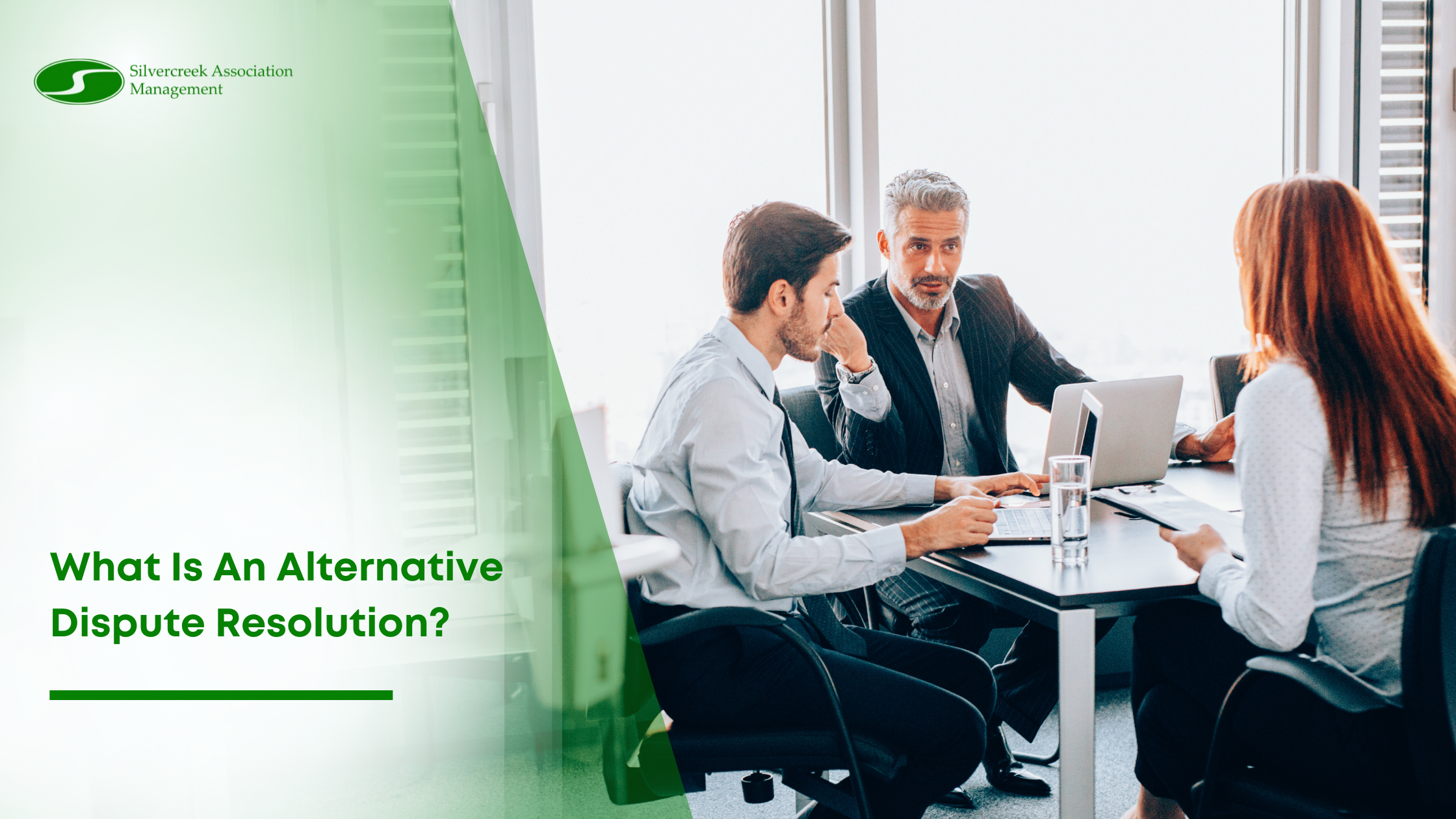 An alternative dispute resolution is a way for homeowners association members to resolve conflicts without going through the traditional legal system. This can include mediation, arbitration, or collaborative law, often resulting in a quicker and less costly resolution for all parties involved.

It is common for community residents and homeowners associations to disagree occasionally. The HOA board should allow homeowners to confer and discuss with them when a dispute occurs.

The dispute resolution procedure must be expeditious, fair, and reasonable. This process is called Internal Dispute Resolution, or IDR.

The IDR procedure doesn’t always work, though. Sometimes the HOA boards use an Alternative Dispute Resolution (ADR) approach to resolve issues, and it is often an effective alternative option that can help associations save money.

Keep reading to learn more about this non-judicial approach and how an HOA can apply it if needed.

Every neighborhood that an HOA governs is bound by the by-laws, which contain specific regulations and rules, and you can expect homeowners to disagree now and then.

Moreover, they often dispute with the association or other neighbors. In that case, an alternative dispute resolution must be offered by HOA board members.

An alternative dispute resolution (ADR) can be defined as the use of arbitration or mediation so that a final determination is made after reviewing both parties’ cases by a neutral third party.

That said, an alternative dispute resolution serves as a way for homeowners and HOA boards to reach an out-of-court agreement and resolve a dispute.

ADR can be useful when an IDR (Internal Dispute Resolution) process fails for some reason.

Typically, an ADR committee consists of community residents or homeowners who aren’t HOA board members and have nothing to do with homeowners association management. This process involves taking the following three steps:

The homeowner and board work together to identify the problems at this stage. They inform one another of their interests, objectives, and requirements to develop potential solutions and determine the final conditions.

Both parties can concentrate on their interests because it is a loosely structured, collaborative process. Since it is informal, negotiation doesn’t take much time and money.

It’s the only action necessary when rational individuals engage in sincere negotiation. The next step is mediation, which is only required if a solution is not reached during the negotiation.

When negotiations fail, a third party should resolve the conflict between the homeowner(s) and the HOA board. A mediator considered neutral with no interests in either side is typically used for the mediation.

That person is supposed to help reach a middle ground after listening to all arguments. This is a voluntary process, meaning neither the board nor the homeowner is forced to participate.

Keep in mind that it takes more money and time than negotiation. The goal is to preserve relationships between the parties who have a conflict, allowing them to settle. If it does not work, arbitration is the last step they can take before going to court.

Just like meditation, this formal process involves a third party (an arbitrator). A legal expert needs to resolve the dispute based on testimony and evidence.

Note that the arbitrator’s decision is unchangeable in arbitration, so both parties must uphold that final decision. They are not able to file a lawsuit in most cases.

It is only possible to appeal the final decision under specific circumstances. While arbitration takes considerable money and time, it still costs less than filing a lawsuit.

Reasons to Use an Alternative Dispute Resolution

Although litigation is the first option considered in a dispute between the association and homeowners, more and more people use alternative dispute resolution today.

In recent years, ADR has grown in popularity because it turned out to be an effective method for resolving conflicts and disputes.

All parties involved can reap the benefits from it when used properly. Listed below are some of the reasons to use an alternative dispute resolution:

How Can HOA Boards Implement an ADR Program?

Every HOA needs to create a program for alternative dispute resolution. Even if your state doesn’t require it, this is always a good idea because ADR can make it easier for associations to resolve disputes without involving the courts.

In addition to developing an ADR program, the HOA boards must implement it correctly. This requires the following four steps:

The board must appoint one representative to meet and talk with homeowners, with or without legal counsel, to solve the problem and agree out of court.

While homeowners are not obligated to attend a meeting, the board members can’t refuse it. If both parties agree, they will sign it and avoid going to court.

The prohibiting lawsuits are often brought against homeowners associations even though they didn’t utilize an ADR first. That’s why many states have been enacting laws intending to minimize the number of disputes in courts.

For instance, HOAs and board members must go through the ADR process before filing a lawsuit in California. Likewise, homeowners and their associations in Florida have to participate in pre-suit mediation for certain disputes.

Litigation Is Not Always the Best Option

For the majority of community disputes, it is possible to find a solution without involving the court. Even so, only some people want to do so.

Homeowners often file a lawsuit rather than an alternative dispute resolution, even though ADR is a cheaper option that takes less time.

HOA board members and homeowners should become familiar with the state laws before proceeding with a lawsuit. If necessary, contact a lawyer for legal advice or assistance.

If your board cannot handle dispute resolutions, you should consider hiring an HOA management company.